NFL Scouting Combine: Why I watch, and don’t care…

Like many NFL fans looking for a little football fix I found myself watching the NFL Scouting Combine this last weekend and will likely tune in to catch some of the NBA combine in early May. As an athlete and a trainer it’s interesting to see these young men perform the various skills tests and fitness measurements and to see the kinds of drills that the trainers put them through. The question though that is constantly debated is how well these measures translate onto the actual playing field. Coaches, trainers and of course the fans have been asking this question since the day these types of performance reviews began to be commonplace. Furthermore, some athletes who have played well in college may choose not to participate for the sole reason that they may tarnish in some way their past performance on the playing field. 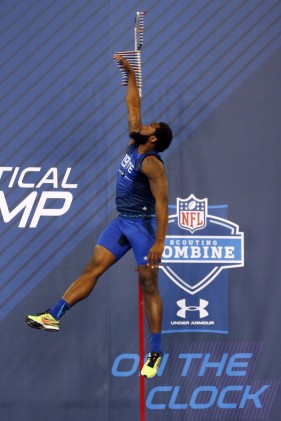 So just how valuable are these test at measuring an athlete’s potential? The first question that needs to be asked is potential for what. The tests themselves can be a fantastic tool for measuring an athlete’s raw physical attributes. These attributes are undeniably important in the games these athletes participate in. A wide receiver’s speed or a basketball player’s ability to jump high are clearly assets in their respective sports. The truth of the matter though is that we could easily find individuals who could outperform these prospective pro players in one or even a few, if not all, of these measures. Some of these individuals may be athletes playing in a lower division and some of them may not be playing any sports at all. Certainly we wouldn’t argue that those individuals should be considered better prospects because their raw physical skills may be better.
So what truly matters when it comes to sports performance? Skill is the first and most obvious answer. Skill is relative though. Again, I would argue that you could find many individuals that can catch or shoot a ball as effectively or dribble or run a route as efficiently as many of these young pro prospects. In a controlled setting that is. And that’s the crux of the problem. The playing field is not a controlled setting. When we practice or train we generally do so in an environment that allows for the greatest level of success. We often know what defense we will be running against or know that if we have an incomplete pass or a missed basket the outcome of the game won’t be in jeopardy. A real game or competition is different though. Success or failure on any given play can make the difference between winning and losing. The crowd may be hostile, the defensive scheme may be new. The pressure can be immense. The ultimate translation of skill into successful performance is a result of a player’s ability to deal with the many variables inherent to the chaos of the game.
In sports psychology a player’s performance is often linked to their ability to manage arousal (the general preparedness of the body for action), their ability to concentrate, attentiveness to the many things going on around them, and to their own personal confidence. These attributes are sometimes referred to as the four pillars of peak performance: skill, arousal, concentration, and confidence. It is the last three that I believe are ultimately the most important. Without managing and harnessing these attributes effectively, skill cannot be maximized. How do we develop these attributes? Primarily by playing our respective games. Nothing beats on the job training when it comes to sports performance. How do we measure these attributes? With great difficulty. The fact is that they are a precarious set of attributes so firmly entrenched in our psyche. We have all seen athletes who have been at the top of their game one day and struggle the next day or even the next year. Tiger Woods comes to mind.

Does anyone really doubt that when Tiger practices at the driving range or on the putting green between competitions that he doesn’t consistently perform well? Why then does someone who we know to have exceptional skill not perform well in competition? The answer lies not in his raw physical attributes or even skill but in his ability to manage that skill under great pressure in the ever-changing chaos of competition. The truth of the matter is that the evaluation tools used at these various Combines are just one of the ways in which these athletes are assessed. I think most coaches would admit, and many of them have said, that ultimately it’s a player’s performance on the playing field that carries the most weight. Nevertheless, it still makes for interesting television and debate and I’ll probably watch next year all the while telling myself it doesn’t really matter.