I typically shoot off a bench using front and rear bags. Occasionally I use a bipod. Lately though as I have begun to reload my own ammunition and work on load development it has become clear that if I truly want to evaluate a particular load I need to eliminate the biggest variable: ME!

So I started shopping for a shooting sled. I am fairly thorough in researching anything I buy and I wanted to make sure that I wasn’t so cheap that I would end up having to upgrade to a more expensive model without getting maximum value from the one I had. Ultimately I chose the Caldwell Lead Sled DFT. I bought it from Amazon for $179.69. Quite a few retailers sell it including Bass Pro (most expensive, who would have thought…), Midway, Cabela’s, and even Optics Planet. Usually retails for about $200 bucks so I got a decent deal. Pretty sure I have seen it on sale for even cheaper though so keep your eye out if you’re interested. The DFT appears to be the flagship model of the Caldwell line. One feature that was immediately appealing was the double rail system that allows the use of longer AR type magazines. In theory anyway, more on this later. Otherwise the sled seemed robust and heavy and presumably sturdy.
Assembly was easy and strait forward considering the variety of parts that came out of the box. Probably took me about 15 minutes to have it completely together. Step 1: Assemble tray and legs to frame. Step 2: Attach front cradle to frame tubes. Step 3: Attach elevation system to front cradle. Easy as 1, 2, 3. Instructions were fairly clear but did include extra steps that were unnecessary due to some components being partially assembled already. I was immediately impressed by the sturdiness and weight of the sled. You could almost believe you wouldn’t need any extra weight to keep it from moving on the bench.

I did a couple of function tests to insure that the sled was operating correctly. I moved the front cradle back in forth on the rails using the quick release mechanisms, tried the windage knob to insure the front cradle would move left and right and finally the elevation wheel to move the front rest up and down. Everything seemed good, so off to the range.
The Good:
The sled makes for an excellent shooting platform. The rifle sits securely in both the front and rear rest. It is easy and comfortable to sit alongside the rest and shoulder the rifle/rest just as you would without it. The elevation wheel and windage knob are easy to reach with your non-trigger hand while looking through the scope and allow for fine adjustment while giving good tactile feedback. For more substantial elevation adjustments the rear foot can be adjusted. This was necessary on occasion depending on the height of my target down range.

Overall, I could not be more pleased with the controls and the amount of adjustment available to the shooter. The platform seems to offer everything a shooter needs to get a rifle’s true point of impact (POI). I doubt I will ever zero a rifle again without using a shooting sled.

The Bad:
The weight tray. It is poorly designed. Not only is it shallow and therefore limiting the size of the weights or bags you can use without running into the main rails but it is also curved in such a way as to limit traditional weighting methods such as plates. I gather this design is primarily to encourage the purchase and use of Caldwell’s weight bags that should fit neatly in these curved trays.Having said that I did manage to fit a ten pound plate and four 2 and 1/2 pound plates in the tray for a total of 20 pounds. More than enough for the .223 calibers rifles I was shooting but likely not enough for larger calibers.

The weight tray also complicates the use of longer magazines common in both AR and AK rifle platforms. This is a particularly big design flaw considering that the sled is designed and marketed to accommodate these types of magazines. Fortunately I had shorter 10-round magazines available when shooting my 24″ heavy barrel AR. I would imagine that depending on your particular rifle it would be possible to take advantage of this design but for my particular rifle I could not. As you can see in this photo below, even with a relatively short magazine there is a limited amount of room below. 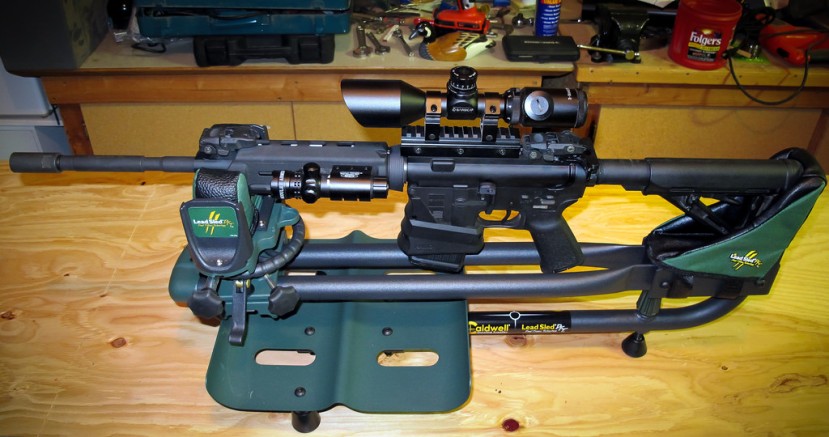 This may not be a particular problem in of itself but it does mean that in order to place a longer magazine in the rifle you would need to remove the rifle from the rest. In my mind not a particularly good solution. It’s also possible in the case of this photograph that the stock can be collapsed further and the front rest moved back allowing the magazine well to sit further back and not directly over the weight tray. All in all, not a deal breaker by any stretch, just something to understand up front.

I am very happy with the Caldwell Lead Sled DFT overall. The limitations and flaws I outlined above frankly have little to no impact on getting the sled to perform as I would like it to. They just keep it from being perfect. I can however see how these design flaws could be a true hindrance for some shooters and their particular rifles. So how did it perform? After all I bought the sled to test handloads in an attempt to measure their accuracy. Interestingly, I did have to make an effort to limit my contact with the rifle to minimize changes in point of aim (POA). If I held a firm cheek weld POA was still effected, the downward pressure causing POA to rise and breathing to cause POA to shift left & right. These are things I am normally accustomed to dealing with when doing precision shooting but as I mentioned I wanted to eliminate as many human variables as possible. I had to therefore be careful to rest my cheek very lightly on the stock while looking through the scope.  It is important to mention as well that trigger control is still an important part of getting the most accuracy out of the rest.

I tested two rifles in anticipation of writing this review: a Tikka T3 Varmint in .223 and a Colt CAR A3 AR-15 also chambered in .223. I used two loads for each rifle, one as a control of sorts and the other my handloads. The control load was primarily geared to finding a baseline of accuracy for each rifle. The particular load used was Australian Outback 69g HPBT match ammo. I have used this ammo in my Tikka before and it produced my best groups shooting off of bags at about 1/2″ at 100y or 1/2 MOA.  Off the sled, about the same at 1/2″ at 100y. I think this is a primarily a testament to the inherent accuracy of the Tikka. The handloads were Hornady 55g FMJ-BT bullets. My previous best off of bags with this round was a 4-shot group measuring 0.853″. Off the sled, I shot a 4-shot group that measured a fantastic 0.453″.

The Cladwell Lead Slead DFT will definitely be getting regular use at the range while I am working on load development or need to sight in a new rifle or scope. I highly recommend it to anyone looking for an entry level shooting sled.