I’ve been using the MantisX for a couple of months now and with the exception of a busy week here and there have used it probably four out of seven days every week. I don’t spend an hour each time mind you, usually I’m only firing 30 to 40 shots each session. That is far more dedication though than I have ever maintained dry firing on my own. In fact, the app indicates that it’s recorded just over 2000 trigger pulls during that time. That’s not an insubstantial amount of practice. Even more importantly, it’s felt like quality practice. 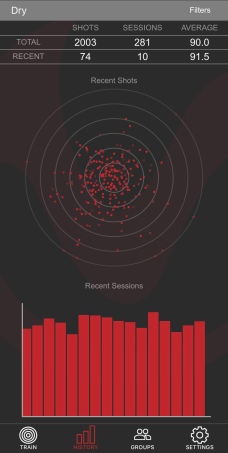 In Part 2 of my review of the MantisX firearms training system I’m going to look more closely at the various features of the system as they relate to dry fire practice. And although I have been using the MantisX system during live fire, it is with dry fire practice that I have found it most useful. Primarily due to the ease of which I can participate in dry fire training. In Part 3 of my review I will look at MantisX’s live fire training capabilities.

As I  have mentioned previously, one of the MantisX’s greatest attributes is giving the user goals and focus while practicing skills that often have no easily measured outcome. I was no stranger to dry firing before the MantisX but had no way to measure progress or establish a progression of skills. No way in fact to tell if my dry fire practice was encouraging good habits or reinforcing bad habits. MantisX has completely revolutionized how I go about my dry fire practice. Instead of arbitrarily grabbing a gun and squeezing off a couple of dozen trigger pulls, I am practicing with true intention and focusing on particular sets of skills.

Before purchasing the MantisX system I spent a fair amount of time reading and watching reviews. Most of the them included demonstrations of how a trigger pull is measured and analyzed and what tendencies or errors were made that may have resulted in a poor shot. That is after all the core of the MantisX’s function. What I couldn’t find was a breakdown of the various drills and exercises included in the program. The MantisX comes with a user manual of sorts but provides a minimal amount of specific information. What I hope to do in this review is breakdown as efficiently as possible all the many features of the program as they relate to dry fire.

This is the launch screen of the MantisX app. As you can see there are four tabs at the bottom of the screen: Train, History, Groups, and Settings. The Train tab however can only be accessed after you have connected to the MantisX smart sensor. The History tab provides a wealth of data that can be filtered by firearm, firearm type, which hand you’re shooting with, live or dry fire, and drill. The Groups tab is for those social users out there, allowing you to follow friends to show them your progression and see theirs. Not my thing really. Finally the Settings tab allows you to select whether you are practicing with a pistol or rifle, select a specific firearm, choose right or left hand, select live or dry fire,

and finally select how and where the sensor is mounted on the firearm. This tab also includes other advanced setting such as audio, data syncing, and troubleshooting. MantisX takes troubleshooting pretty seriously. After going through an exercise to test shot detection on my TP9SFX and submitting the data, I received an email a few days later from a tech with further suggestions about how to solve my issues. Pretty impressive actually. Some of these advanced setting have proved quite useful. The shot detection sensitivity for example has proved very effective at detecting those very light triggers in a couple of my handguns like the Canik TP9SFX. I have also found the minimum score threshold to be useful for a couple of my rifles that cause a shot to be detected in error when resetting the trigger with the charging handle.

Reloading Drills: The drills below are listed as pistol only because they are only optional when you have selected a pistol from your firearm list. You can work around this limitation by setting the category for your rifles as pistols. This doesn’t present any obvious problems other than your inability to select the rifle only drills. No great loss in my opinion as I will expand upon below. It’s a shame MantisX necessitates that work around. These reloading drills are just as useful for tactical rifles.

The next three drills below are excellent for developing trigger and shooting speed. They unfortunately are of limited use for dry firing due to the necessity of racking the slide after each trigger pull. Very useful for live fire and include a metronome at the specified cadence to help guide you.

The next series of drills for the rifle offer little to no utility from the standpoint of dry fire. I’m not entirely sure of their utility in live fire either considering you could seemingly do these drills with Open Training or Timed Benchmark.

Lastly, the MantisX firearms training system includes a basic introduction course that helps a new user understand the core functions of the system as well as a marksmanship course that forces the user to complete given challenges on a daily basis. Even demanding certain thresholds of success to continue on. One of the best features of the marksmanship course is that you must complete some drills on several consecutive days to get credit and move on. Skip a day and you will be starting that challenge over. Very useful for forcing you to train every day and build discipline. I’ve actually gone through the course twice for this very reason. Upon completion of the MantisX Basic Marksmanship course they actually send you a patch! Free of charge. It’s a nice touch and a testament to a company that cares about their product and customers. Finally, there is the FBI Qualification test. Which inexplicably is now missing from my menu options. I know I’ve seen it listed before but now it’s gone. Either it’s a bug or was removed during a software update. I’ve been meaning to send MantisX an email to see which it is, but haven’t gotten around to it. I know the FBI qualification test is for live fire and includes drawing from a holster and wonder if it was removed for liability reasons or because there is an inherent weakness of the MantisX system when it comes to using a holster that I will discuss below.

As I mentioned at the beginning of this article, I have registered over 2000 shots using the MantisX Firearms Training System. I am a true believer and can say with good confidence that it’s helped improve my shooting in a multitude of ways. Sight alignment, trigger control, accuracy and reaction time are all areas that have improved both during dry fire and live fire. Even more importantly, I am inspired to continue using the system and expect to see even greater improvement and consistency. I have been using the system with a multitude of firearms including both pistols and rifles. It is worth mentioning that MantisX offers two other training aids that improve the functionality and ease of use of the system. 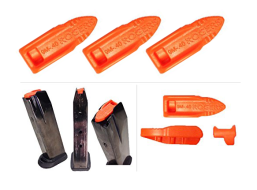 The first is of which is indispensable in my opinion. The TRT Tap Rack Dry Fire Safety Training Aid loads into an empty pistol magazine and keeps the magazine follower positioned so that it will not engage the slide stop of the pistol. It allows the slide of the pistol to pass over the TRT without stripping it from the magazine. This aids in even more realistic practice in that you can use a magazine (albeit still empty) during dry fire training and can aid in various reloading drills as well. They make these devices for 9mm/.40, 45 ACP and .223/5.56 magazines. They are inexpensive and useful with just regular dry fire as well.

The second accessory I recommend is the Universal Magazine Floor Plate Rail Adapter. It’s a Picatinny rail adapter that bonds to the bottom of your magazine floor plate so you can attach the MantisX to your firearm. This is especially useful if your firearm doesn’t have a rail or you would like to use a holster.

They do sell custom floor plates for a variety of magazines but they are quite a bit more expensive at $25 each. The universal adapter bonds to a flat magazine floor plate with high-strength VHB adhesive tape. It’s appears quite strong and is removable. Though I suspect that you can’t easily reuse it after it’s been removed. So you’re basically designating a specific mag to MantisX use. If you have spares this is the most economical way to go at $10 each. This allows you to use that MantisX without worrying about a custom holster to accommodate the sensor.  I was skeptical about how well the MantisX would work mounted at the bottom of the magazine and did quite a bit of searching for holsters that would accommodate the MantisX without the need of a magazine adapter. Many holsters that are made to accommodate rail mounted weapon lights are designed to establish retention based on the profile of specific lights. And though the MantisX might fit, you may very well lose what retention capabilities the holster has for that particular gun. The MantisX sensor has proved to be almost perfectly reliable mounted to the floor plate of a magazine. The one exception is when doing fast holster draws with a pistol with a particularly light trigger pull, like my TP9SFX. The sensor doesn’t appear to have enough time to differentiate between the movement of the draw and the trigger press.

In part 3 of my review of the MantisX Firearm Training System I will explore how I use the system during live fire. I’ve put about 500 live rounds downrange using the MantisX and as one would imagine the results are much more meaningful than during dry fire. Stay tuned.