Day at the Range

Getting Started with Black Powder Revolvers

By JD on August 4, 2019 • ( Leave a comment )
I make it a point to shoot every firearm I own. I shoot some more than others of course, but I maintain a certain arbitrary rotation. Lately I’ve been focused almost exclusively  on my handguns. Non-gun enthusiasts may wrongfully assume that shooting one gun is like shooting any other. They would be wrong. Every gun has it’s own unique personality. From different ergonomics, to different triggers, to different recoil impulses. Every gun is unique in its own way. This is fundamentally why gun lovers keep buying more guns. A car enthusiast has multiple cars because they all drive, handle, and accelerate differently. They may all get you to 7-Eleven down the road but a true enthusiast enjoys the differences in how each one does it.  The black powder revolver or the cap and ball revolver or even more simply the percussion pistol is a gun with both personality and history. It also happens to be the only gun in my collection that I’ve never shot.
With a little more free time than usual this week I made a point of finally shooting the cap and ball revolver I’ve had sitting in my safe for almost 4 years now. It’s a Pietta 1858 New Army Revolver that I purchased from Cabelas for $225. Why so long to finally shoot it? Honestly, the anxiety of not knowing exactly what I was doing was my primary hindrance. Even with my experience reloading cartridge ammo I found the process somewhat intimidating and with my already limited time at the range it was easy to keep passing it up to shoot something else. Having a little extra time this week, it was time I stopped making excuses and finally shoot it. Having done so now I have two immediate regrets. First, I should have done it much sooner! And secondly, I’m going to be spending money on a whole new subset of firearms! 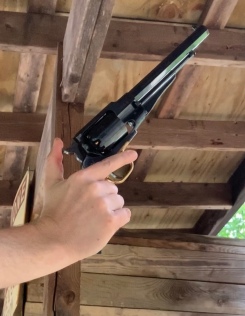 One of the neatest things about these pistols is their history. These Remington revolvers are relatively fair reproductions of the pistols widely used by soldiers on both sides of the Civil War. Though referred to as the model 1858, they didn’t truly see service until around 1861 and then around 1863 as the “New Army.” They were produced by E. Remington & Sons, Ilion, N.Y., based on the Fordyce Beals patent of September 14, 1858. These Remington revolvers were widely considered some of the finest handguns of their time. They were highly sought after and had three distinct advantages over many other cap and ball revolvers of the time. Those three advantages included:

Loading the cap and ball revolver is really quite straightforward. Generally the order of operations is a given. What I have found however is a variance of opinion about the necessity of certain steps. For example, some people don’t use wads between the powder and ball, some prefer a slightly oversized ball to provide the best seal to the cylinder, and some forego the use of any lubricate at the end of the cylinder that may serve to limit the possibility of chain fire. Personally I see little reason not to follow all of the steps to maximize my safety and the potential longevity of the firearm. My research for example has led me to conclude that it is actually the wad between the powder and ball that has the greatest impact on minimizing the possibility of chain fires. Not the grease or “bore butter” that is commonly used to seal each cylinder. So why use the grease at all? My understanding is that the grease can help slow the fouling of the barrel and perhaps ease cleaning. To each his own I suppose. I have no doubt that the soldier using the black powder revolver had out of necessity or speed done without both wads and grease.  Below are the steps for loading the cap and ball revolver. I have included links to the specific products I use as well. 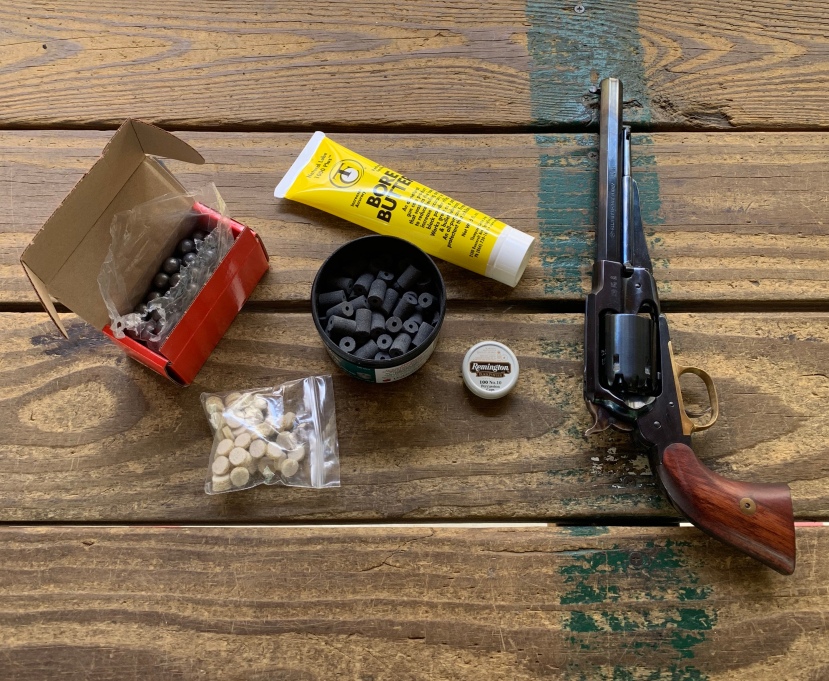 For my first experience with black powder revolvers I have chosen to go with Pyrodex pellets instead of actual black powder. Some may balk at this for its lack of authenticity but I have no regrets. These pellets are easier, less messy, and virtually idiot proof. They are however undoubtedly more expensive. Perhaps if I shoot more frequently I will switch. As far as wads go I will likely always use them. They are an additional expense but as I have already mentioned, they help insure that the ignition of one cylinder doesn’t ignite a neighboring cylinder. Like many others, I use a slightly oversized ball to create the best seal in the cylinder. The Pietta 1858 New Army calls for a .451 inch ball but it is commonly recommended to use a .454 inch ball. This does make the seating of the ball a bit challenging at times. As far as lubricant goes I use Thompson/Center Bore Butter. This lubricant is solely to reduce the “tar like” fouling that is common in black powder firearms. I have read about people using Crisco vegetable shortening as a cheap alternative but can’t speak to it’s effectiveness. All these component add up to about $.50 a round. Not cheap but not particularly expensive either. Especially considering that in a given outing I am typically not shooting more than 24 to 30 rounds. For those interested the individual components break down roughly like this:

So loading went pretty easy. First time took me 9 minutes, second time 6, and the third 5 minutes. The only real effort was ramming the ball into the cylinder. A decent amount of force is needed and technique is involved from the standpoint of holding the gun and applying that force with the best possible leverage. I have an accessory press of sorts that allows the cylinder to be loaded separate from the gun. I imagine this would make this task trivial in comparison. Problem is, I’m not real good at removing it and more particularly, putting it back. I’m getting some practice though. I think the most important thing when reloading a black powder revolver is having a distinct and consistent order of operations. Load all the powder charges, place all the wads then tamp them down. So on and so on. Do it the same way every time. If your sufficiently bored and have five minutes to kill, the video below shows the complete process.

Now on to the fun stuff. I had absolutely no idea what to expect the first time I pulled the trigger. The experience of firing this kind of firearm is largely foreign to me.  The one-handed operation of pulling the hammer back (I shoot very few revolvers), the stance, sighting down the notch in the hammer. All of it just different enough to make the experience one of a kind. 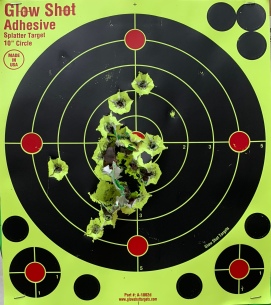 Surprisingly the recoil is very manageable and the accuracy far above expectations. My first eighteen rounds made a good sized hole just below the bullseye. I couldn’t be more pleased and I can’t say I have enjoyed shooting another gun for the first time as much as I did the Pietta 1858 New Army. There is something to be said as well about the smell of the smoke and the cloud that forms after unloading all six chambers! In many ways though the ultimate enjoyment of firing a black powder pistol comes in part from the process of loading the weapon. Even cleaning the revolver is different than any other firearm and gives the overall experience a real uniqueness. I happen to be finishing up a post-apocalyptic thriller by D.J. Molles called Wolves where cap and ball revolvers are the weapon of choice (and largely the only option) for the survivors of a war torn Earth. Along with my own experience its given me a new appreciation for the challenges these firearms must have presented to those using them during the Civil War and the Wild West after. Of course cap and ball revolvers had been around since as early as 1836 but still represented a giant technological leap forward from the flintlock pistol.  They were famously used by the likes of Doc Holliday, Wild Bill Hickok, the Texas Rangers, and even Clint Eastwood as The Outlaw Josey Wales. Having the opportunity to shoot these pieces of history is well worth the effort and I highly recommend adding one to your firearm collection. Just don’t put off shooting it too long.

Categories: Day at the Range