Having grown up reading Tom Clancy’s books and watching the movie adaptations I was undoubtedly interested in Amazon’s new modern adaptation of Clancy’s most iconic character: Jack Ryan. With a very limited amount of time to watch TV and with a two year old ruling the house, my choices of what to watch are deeply contemplated. Frankly I was waiting for someone to recommend it to me or perhaps read a compelling review. Unexpectedly that review came courtesy of Sonia Saraiya from Vanity Fair. In her review, Jack Ryan is a Patriotic Nightmare, she makes a rock solid case that Amazon’s Jack Ryan is a show for me!

In her review she begins to describe the show as “hysterical as in you wish its team had worked harder to take the temperature of the world around us“. Well okay, I didn’t realize it was a comedy but I certainly can appreciate some cleverly timed humor. Sonia’s true feelings became a little more clear later in her review though when she states that “the subject matter feels so painfully insensitive”. Ah, it’s politically incorrect. Now we’re getting somewhere. The first indication that this show might be right up my alley.

I only wish Sonia would have shared with us her definition of what she thinks an impressive American man look like. Regardless, he sounds like a pretty cool guy to me. Somebody I could have a beer with for sure and very likely would watch a show about. Sonia continues on fleshing out more clearly Jack Ryan as a character and the emerging plot. “Both its protagonist and its plot are based on the foundational, unquestioned notion that American-military might—the best-funded killing infrastructure in human history—is helping to save the world.” She continues on stating that “Its other primary story objective is proving that Jack Ryan deserves his white male entitlement—” Now this is something I can truly relate to. I’m a big believer in America’s military might and as far as white male entitlement, I certainly can relate to that.

Jack Ryan of course is played by none other that John Krasinski. Being a long time fan of The Office, I am huge fan of Krasinski in his role as Jim Halpert, a mild mannered paper salesman. But can he pull off being the most famous figure in Clancy’s fictional universe? I might not have thought so until I saw the movie, 13 Hours: The Secret Soldiers of Benghazi. Undoubtedly one of Sonia’s favorites as well. In 13 Hours Krasinski really cuts his teeth in establishing himself as a real alpha male and potential action hero. Sonia continues on to demonstrate how well Krasinski pulls of his portrayal of Jack Ryan stating “there are numerous moments where Jack courageously stands up to defend his position in a meeting” (that’s right, Jack don’t take shit from nobody!) “takes his shirt off to casually display his pecs” (it’s possible I’ve done that a time or two) “or spins charm in the direction of a seemingly sexually available female” (hmm…pretty sure I’m guilty of this) “—all clearly intended to indicate, quite firmly, that Jack is all man.” Well there you have it! I’m just glad, like Jack Ryan, I too can be measured as a real man according to the criteria Sonia lays out. Once again, this is a guy I can relate to and possibly respect. I really must watch this show.

Sonia wraps up her review with a couple of firm assertions. She says the show is so egregious in fact that “Jack Ryan is an astonishing case study in toxic narratives. I watched it twice, slack-jawed in amazement.” Apparently she watched it twice! I very rarely watch anything twice unless it’s really good.  She continues “This is a show selling a false narrative that many people would prefer to believe as truth, and it appears to have no qualms about that.” And finally, what ultimately sold me was Sonia’s confident proclamation that “Jack Ryan feels like a machine designed to turn us all into the sort of viewers who disappear smiling down jingoistic Fox News rabbit holes. It assumes that we—Americans, and America—are doing a good job.” I was however a bit stumped by Sonia’s use of the word “jingoistic”. She uses a couple of big words in her article but fortunately I knew what they all meant. Jingoistic however, I had to look up. Apparently it is an adjective and derogatory in nature. No surprise there. A quick search reveals it’s definition as: characterized by extreme patriotism, especially in the form of aggressive or warlike foreign policy. According to Wikipedia, Jingoism colloquially, is “excessive bias in judging one’s own country as superior to others — an extreme type of nationalism.” 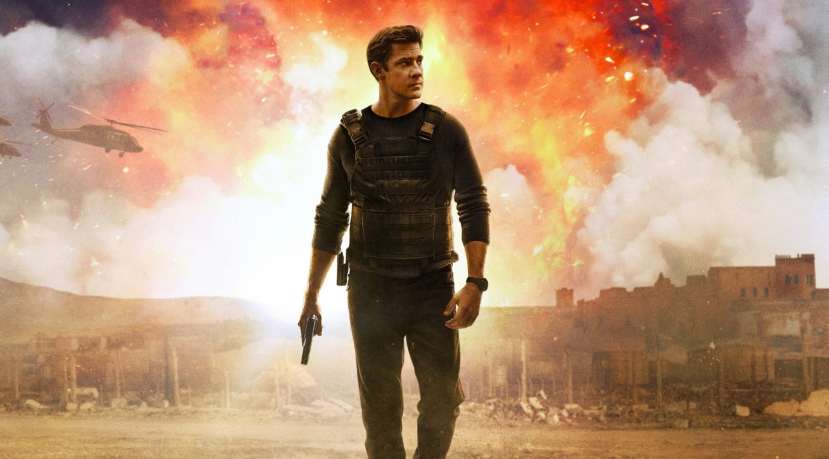 I must admit, I’m extremely biased. I think America is the greatest country in the world. Intrigued by this new word in my vocabulary I wanted to find some context. Apparently in an article in The New York Times, Theodore Roosevelt says “There is much talk about ‘jingoism’. If by ‘jingoism’ they mean a policy in pursuance of which Americans will with resolution and common sense insist upon our rights being respected by foreign powers, then we are ‘jingoes’.” Sounds good to me! You go Teddy! Another reference to the word I came across said “The policy of appeasement toward Hitler led to satirical references to the loss of jingoistic attitudes in Britain.” Well, we all know how that turned out. Still trying to figure out the derogatory nature of the word. Sonia clearly thinks it a positive adjective as she rightly predicts that I will be smiling with innocent naivety as I enjoy this modern iteration of Jack Ryan.

I want to sincerely thank Sonia for inspiring my desire to give Amazon’s Jack Ryan a watch. I have only had the opportunity to watch the first four episodes but it has cemented my desire to finish the series. Sonia has really hit the nail on the head when it comes to her review, laying out in exquisite detail every aspect of this show that appeals directly to me. It’s almost as if she wrote the review just for me. I’m flattered that she knows me so well. If you haven’t been convinced as well by Sonia’s insightful prose, I can only hope to add my own recommendation, though not as eloquently as she.