Taking Another Turn on the Wheel of Time

“The Wheel of Time turns, and Ages come and pass, leaving memories that become legend. Legend fades to myth, and even myth is long forgotten when the Age that gave it birth comes again.”

The first lines of Robert Jordan’s epic fantasy series and very apt words for describing my re-acquaintance with the books. I couldn’t say for sure when I first started reading the Wheel of Time series but the last book came out in 2013 and I remember having to wait for that one to be released. In fact that may have been the case for all three of the last books. I do remember being in the midst of reading the series when Robert Jordan passed away. That would lead me to believe I began reading the series in the early 2000’s. So somewhere around 15 years ago. Regardless of that length of time, and it does seem so long ago, the series left an undeniable impression on me.

It truly is an epic tale of the grandest proportions. It includes something for everyone: heroes and heroines, magic and war-craft, mystery and political intrigue, love and tragedy. Written over the course of 23 years with over 11,000 pages in paperback form and over 4,400,00 words, epic may be an  understatement. A quick Google search list the Wheel of Time series as the #6 longest fantasy series of all time. I suspect it would be higher though if you eliminated a couple of series that aren’t truly one continuous story but rather individual stories written in the same universe. The Xanth series by Piers Anthony a notable example.

The shear length of Jordan’s epic lends itself well to its greatest strength: character development. Great transformations occur to just about all the main actors in the Wheel of Time series. From sheepherder to the Dragon Reborn, from young village girl to the Amyrylan Seat. All of the main characters have such interesting and impactful stories that give the series an incredible amount of depth. 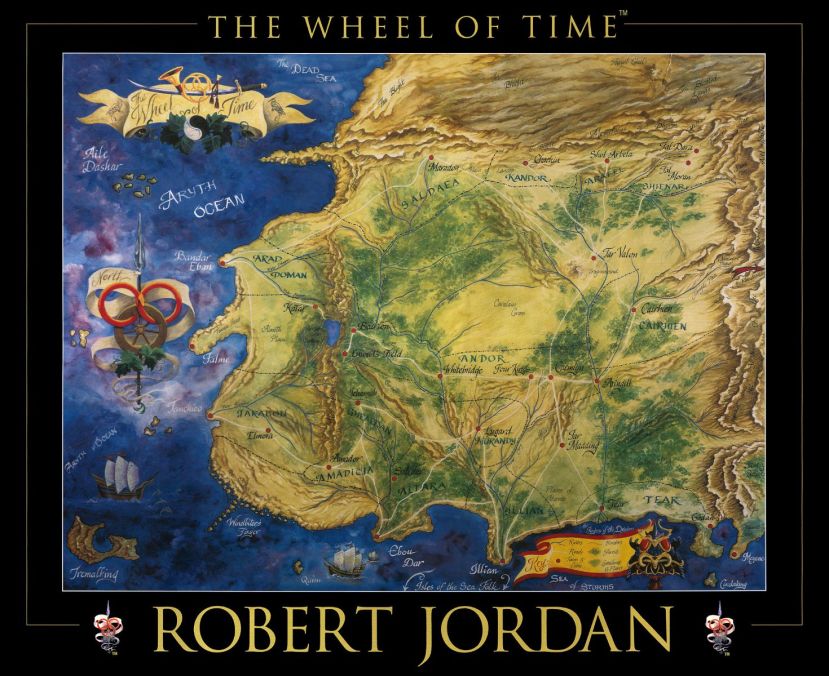 Robert Jordan truly has a talent for using words to paint a picture of his fantasy in the most thorough way imaginable. Jordan’s writing contains such a level of detail that as a younger reader it was almost a detriment. I can remember clearly when reading the series through originally of skipping entire paragraphs and even pages that contained nothing but the setting of the scene. I was younger then and likely less appreciative of Jordan’s genius than I am now.  I am also re-experiencing the series through Audible. With an excellent reader the audio version gives the tale an even greater depth allowing the listener to really soak up the richness of Jordan’s writing. The challenge at its core is this: these books are exciting and each book contains epic conclusions and events in and of itself. I simply find myself so excited to advance the story that I want to skip at times Robert Jordan’s well crafted and often lengthy prose. My reemergence into the Wheel of Time series is due to recently listening to Robert Jordan’s epilogue book New Spring that was actually published between the tenth and eleventh book.  New Spring is a background story about some of the main characters who have very important roles in the early development of the story. It’s not meant to be read first, but of course could be. It just better appreciated after the story has developed for some time. I see people recommend reading it anytime after book five or even waiting until after book 10 thereby maintaining the publishing timeline. I’m just getting around to reading it nearly 4 years after finishing book 14.

It’s worth noting that the last three books of the series were completed by another author after Jordan’s death. Brandon Sanderson has proved to be one of the most prolific and accomplished fantasy authors of this current era, and using Robert Jordan’s notes, brought the series to its epic conclusion. If you hadn’t seen Sanderson’s name accompanying Jordan’s on the cover of the last three books I doubt anyone would have been the wiser. I think Jordan would have been as pleased as his readers with how well Sanderson maintained the spirit of the books. Having now just finished for the second time the first book of the series: The Eye of the World, I am finding myself hooked again and excited about the long journey ahead.

Couple of finishing touches on my poly80 build.
Finally got some quality hardwood training swords. Beautifully made Sansibar & Pinuti. Can always use another pair of #escrima sticks as well. Thanks to @fma_supply.
Pistol caliber carbines. What’s your pick?
Breaking out the rimfire in an effort to conserve my larger calibers. I remember scouring the internet in an effort to find .22 ammo the last time we had an ammo shortage. Fortunately I have plenty on hand this time around.
#gotammo #ammoshortageof2020 #wheresalltheammo #ammohoarder #emptyammoshelves #whackamole
Puppy patrol. Sleeping in shifts.