This last weekend I attended an AR-15 Armorers class with my brother-in-law. He had just purchased his first AR-15 and it was a great opportunity for both of us to gain a much more thorough understanding of the rifle platform that truly has become America’s number one sporting rifle. I have read a variety of estimates about the number of AR-15’s lawfully owned in the United States and the number can range from 5 million to 10 or 12 million. If I had to venture a guess, I would say that 10 to 12 million seems like a reasonable and likely conservative estimate. As any gun owner and avid shooter will attest: these things tend to multiply. I personally own three and am in the process of building a fourth. That might alarm some folks, though it shouldn’t. So why three? And why build a fourth? It’s quite common to own a variety of firearms that serve very distinct purposes. Hunters have long understood this. They might have a small caliber “varmint” gun for taking care of pesky ground hogs, a larger caliber deer rifle and possibly an even bigger bore rifle necessary for larger game. 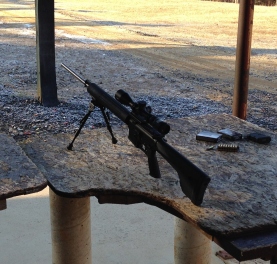 Now I am not a hunter but the three rifles I own I use very differently. My first AR was a 24″ heavy barreled Colt behemoth that I only shoot off a bench or bi-pod. It’s a target rifle. It weighs a ton and I use it strictly when shooting for precision. Which it does admirably. My other two AR’s are more typical carbine length rifles that I primary shoot offhand for fun. 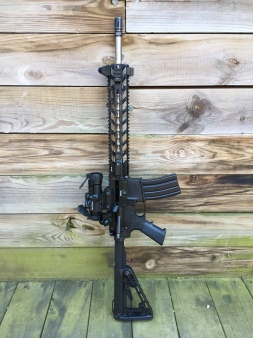 One is a beauty queen with a stainless steel barrel, fancy magnified red dot and an aftermarket trigger that breaks like glass. I shoot it plenty often but I take very good care of it. My third rifle is what I often refer to as my “beater”. It’s the rifle I use when things are going to get dirty, the rifle I don’t mind getting scratched up, the rifle I shoot steel cased ammo out of. The rifle I am going to abuse. It also happened to be the rifle I used for the armorers class I attended and fortunately it passed all functional test and manufacturing standards. I can’t say the same for my brother-in-laws rifle unfortunately. I will speak more about that later. So what makes the AR-15 America’s rifle? Besides the obvious history lesson of Eugene Stoner’s development of the AR-10 and its evolution into the AR-15 and adaptation by the military into what would ultimately become the M16, the AR-15 has proved itself to not only be an ingenious design and very reliable but also highly modular allowing for near infinite customization. I think the AR-15’s modularity is what gives it the greatest appeal when it comes to American gun owners. We are by nature an idiosyncratic group of people.

As my experience with the AR-15 platform grows I have come to realize just how intelligently it is designed. The armorers class this weekend only served to reinforce this belief as my understanding of the ruggedness and balance of the rifle was greatly enhanced. The process of currently building an AR has reinforced this as well. It has also proved to be overwhelming in some regards due to the sheer number of choices available. What type of barrel? What kind of handguard? Muzzle brakes, butt stocks, sight systems, don’t even let me get started on gas blocks. The list goes on and on. Ultimately one must decide what the purpose of the rifle is and that will help to narrow the choices a bit. But only by a bit. In my case I am making a gun to potentially use for 3-Gun competition so my choices revolve around those competitive needs. This is one of the things that makes the AR-15 so appealing though, and even as I tell myself that I won’t be buying or building another after this one, in the back of my mind I am already thinking how I might want one in another particular configuration. 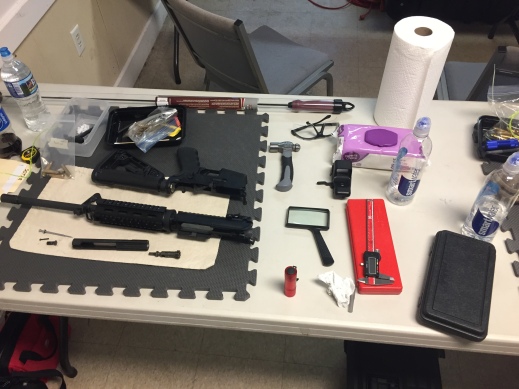 The armorers class we attended was taught by a well know local gunsmith and resident AR-15 expert, Chad Albrecht. His School of the American Rifle (SOTAR) has been serving local gun enthusiasts  as well as supporting law enforcement and our veterans  for some time now.  The class was from 9 to 7 with just a thirty minute break for lunch. That’s a lot of time to spend on one firearm and it’s clear that Chad was only scratching the surface on many of the individual topics. One of the primary purposes of the class was to learn to maintain, clean and gauge your firearm to insure safe and reliable function. I have had ample experience cleaning the AR-15 but as a first time builder I was particularly interested in how various aspects of the rifle are gauged to insure they are within certain specs. Even more specifically I was interested in learning more about how headspace is gauged and determined safe. We are after all initiating explosion after explosion in our rifles and sending a metal projectile out of a barrel at high velocity. Might be important…

Without going into to much detail about the exact nature of headspace it is sufficient to understand that it is the space between the end of the bolt and the beginning of the barrel. Effectively the space that cartridge sits before it is fired. If this space isn’t to spec than the resulting pressure from the ignition of a rifle cartridge can cause additional wear on the firearm or in the worst case scenario cause catastrophic failure. I am just about at the point of my build where I need to test the headspace of my new rifle. Unfortunately these gauges are not free, and although they are not prohibitively expensive by any means, they are an additional cost nonetheless. In my research I have come across varying opinions about the need to gauge your headspace. Some are of the opinion that a new build should have the headspace checked no matter what, others feel like if the barrel and the bolt were both manufactured by a reputable company than they should be in spec and gauging is therefore unnecessary.  Others wouldn’t even consider gauging a new rifle made by a major AR-15 manufacturer. I would have agreed, until I saw my brother-in-law’s rifle fail his headspace test. Brand new rifle from a very well know manufacturer. Lesson learned. 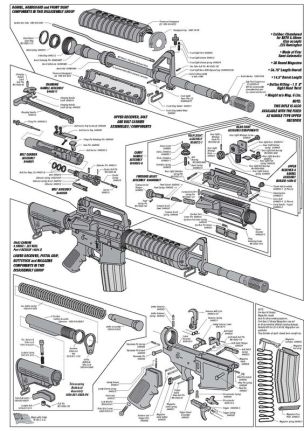 The AR-15 is an extremely versatile weapon platform. It’s capable of serving well as a varmint, small & potentially medium game hunting rifle, it can serve a myriad of purposes for the recreational shooter and also makes for a very capable home defense weapon. I would recommend that anyone who owns an AR-15 try an armorers course if the opportunity presents itself. Better yet, if you live in Maryland or nearby Virginia look up Chad’s school SOTAR and sign up for a class. All of us as gun owners have the responsibility to understand our firearms well enough to insure (as best we can) that we are using those firearms as safely and responsibly as possible. Moreover, a class like this can add longevity and reliability to an expensive tool that you would like to have go bang when you mean it to. I would also encourage anyone who has considered building their own to go for it. I will admit that it was a intimidating prospect at first but the experience has been invaluable. Anyone can do it. All it takes is patience and care. To me, building this rifle in my basement, with my tools and equipment, to my specifications and preferences, is what truly makes this America’s Rifle. God Bless America!