I have been thinking about getting a quality pistol caliber carbine for a long time now. The truth is though that I already own a quality pistol caliber carbine. The Hi-Point 995TS. Go ahead and laugh if you want! It’s funny. The Hi-Point though has been nothing but reliable and reasonably accurate. It is however butt ugly, has few options as far as customization, is a nightmare to breakdown and clean, and magazines (reliable ones anyway) are limited to ten rounds. It also has a fairly short length of pull (LOP) and has never been very comfortable with my 6′ 5″ frame to shoot. So when looking for a new “quality” pistol caliber carbine I was looking for a rifle that was customizable, easy to clean, uses readily available magazines, and of course reliable. The AR platform was the obvious choice. My research into 9mm AR’s left me somewhat on the fence though. Expense was an issue and I felt like I had to pay a real premium to get the 9mm AR I wanted. Ultimately I decided to go with the Just Right Carbine in 9mm. Although the rifle looks like an evil black rifle, the JR Carbine isn’t a modified AR but rather a rifle built for the express purpose of being a pistol caliber carbine. It does however use an AR trigger group and accessories like the buttstock, grip and even the handguard can be swapped easily just like other AR style rifles. 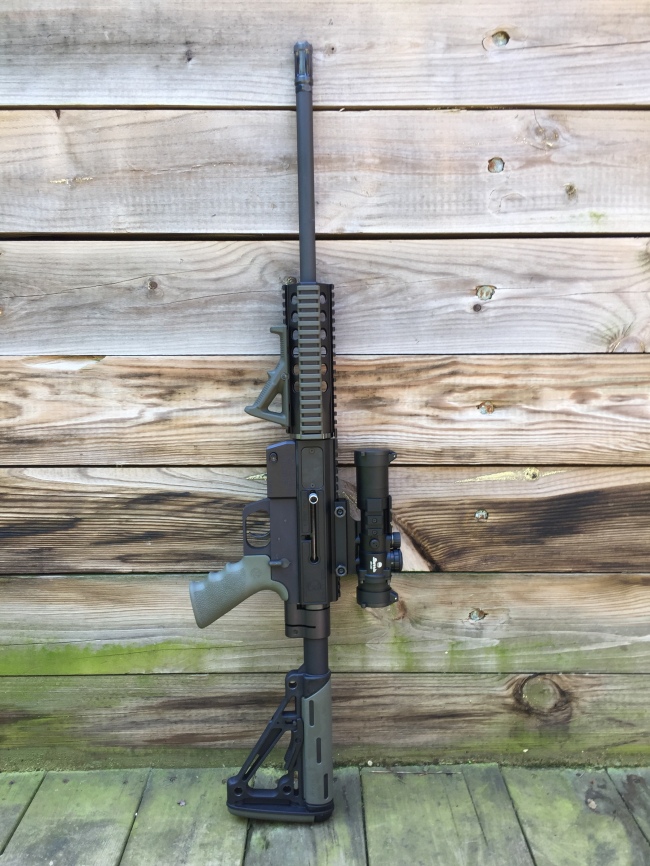 Retail price for the Just Right carbine above is around $775. I purchased mine off GunBroker and when all was said and done (including transfer fees) I paid $749.00. After making some additional modifications including a new butt stock and grip, foregrip, rail covers and a fancy muzzlebreak, I have invested $865 into this rifle. Sure hope it shoots well…

Upon receiving the rifle I went about breaking it down and giving it a good once over and cleaning.

One of the criticisms that the JR Carbine has gotten in the past is the need to remove the rear buffer tube and stock in order to remove the bolt for cleaning. The Gen 3 model of this rifle has solved this issue by including a quick release mechanism that makes removing the buffer tube quick, easy and tool-less. This mechanism makes the rifle exceedingly easy to clean in my opinion. The biggest pain in the entire process is removing the charging handle which is trivial. 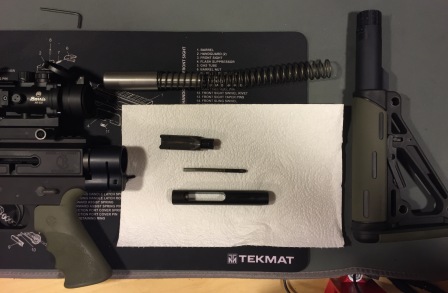 The bolt itself  breaks down easily into parts and with the exception of the bolt face has nothing but smooth surfaces that clean up nicely. The rifle and the bolt can be set up for either right or left handed shooters by swapping the plate that covers the ejection port and by changing the extractor on the bolt to the opposite side. From what I have read and from the manufacturers manual the JR Carbine requires “very little” lubrication. I’ll be honest, I struggled with this idea while putting the rifle back together. The JR bolt has extremely tight tolerances and is fairly stiff to cycle by hand. Much more friction in fact than I am used to having when cycling a bolt manually. Nevertheless, I kept the lube to a minimum. Essentially only leaving a thin layer of CLP on the exterior of the bolt. More lube may loosen up the bolt some but will have the side effect of attracting more dirt and grime which with the JR’s tight tolerances may cause more problems than the reduced friction will solve.

Neither a lack of lubrication or tight tolerances seemed to make a difference when I got the Just Right Carbine to the range. 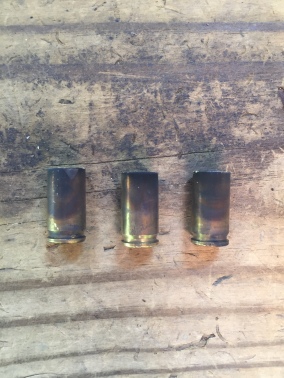 I have put 200 rounds through this rifle without a single malfunction of any kind. I have used a variety of ammo including: Fiocchi 115g, Blazer 115g, Remington 115g and my own 124g handloads. All without a single hick-up. The brass sure comes out dirty though as you can see from the picture on the right. I believe this is not uncommon with these type of blow-back designs. The brass cleans up fine though and the powder residue is of no consequence. I did break down the rifle again after about 120 rounds to see just how dirty the bolt was getting and was pleasantly surprised to find it in decent shape. I debated not bothering to clean it. I did however and once again left it only lightly lubricated. Its worth noting as well that I am using standard Glock 17 magazines, three of them, and all have worked without issue.

So how does the Just Right Carbine shoot? The answer is very pleasantly and from what I can see in this limited test: accurately. Accuracy of course is relative.

I began by shooting off a bench with a front bag at 25 yards.

The primary goal was to function test the rifle and sight in the Burris AR-332 red dot scope that I had laying around and without a home. The first 17 rounds were very satisfying, putting the majority of rounds into a ragged 1″ hole. The trigger like many basic AR milspec triggers is nothing special but I will say that it is generally better than usual. There is virtually no creep or take up, just firm resistance until it breaks at just under 7 pounds of force. The reset is relatively short, very tactile, and loud enough to hear over other people shooting. I had intended originally to install a Rock River Arms 2-stage match trigger into the rifle but doubt I will at this point. The stock trigger is plenty adequate. I shot several more groups while zeroing the sight including some 124g handloads. All groups continued to produce 1″ holes with fewer and fewer flyers. Once I had satisfactorily zeroed the scope I decided some offhand shooting would give me the best feel for the rifle.

The JR carbine shoulders well and although the Burris AR-332 magnified red dot is likely a bit of overkill for a carbine like this, it worked very well for finding and staying on target easily. Again at 25 yards and using 124g handloads I mixed slow fire, double taps and repeat fire with reasonable accuracy. This carbine is just plain fun to shoot. Where I would normally extend the buttstock fully when shooting an AR offhand I found myself shortening the rifle several times due to the ease and comfortableness of how it points and shoots. As a 9mm, recoil is obviously very minimal and that is a big reason these pistol caliber carbines are so fun to shoot. I am confident with a little more time behind the trigger I can tighten up these offhand shots significantly.

Finally, I headed back to the bench and stretched things out to 50 yards. This gun is no tack driver. It’s not intended to be. I seriously doubt I will ever shoot it again off a bench for accuracy’s sake. I bought this rifle for fast, fun and cheap offhand shooting. Nevertheless, I would be remiss not to get a sense of its inherent accuracy. Shooting off the bench and using a front bag I shot 5 five-shot groups. The results were fairly consistent with the groups measuring roughly between 2 and 2.5″. That’s about 4 to 5 MOA and acceptable in my book. I’m not going to bother trying to shoot out to 100 yards. Just don’t see the point. All said the Just Right Carbine is an excellent firearm for what it is: a pistol caliber carbine. And what’s the point of pistol caliber carbines? Primarily for me its the convenience and cost effectiveness of sharing inexpensive and easily reloaded ammunition.   Being able to use my existing Glock magazines is a huge plus.  Speaking of the magazines, the only criticism I can make after this initial testing is the lack of good tactile feel when inserting the magazines. The three 17-round Glock magazines I tested all functioned well and seated solidly but gave little feedback to the shooter as far as being seated completely. The magazines should never be “slapped” into place as this technique can damage the magazines or rifle. Besides that the only other thing I would love to have on this rifle is the ability for the bolt to automatically hold open on empty magazines. The Just Right Carbine has checked all of my boxes. Its is customizable, easy to clean, uses common magazines, and reliable. Not a perfect pistol caliber carbine, but close.